The mother of the baby girl suffered multiple bites while trying to save her daughter, including receiving bites to her face and hands.  These bites occurred while the mother, Jamie Morales, was trying to free her baby daughter from the latching bite of the Pit Bulls.

Pit Bull dogs are notorious for being both vicious and having a latching type of bite that causes significant injury.

END_OF_DOCUMENT_TOKEN_TO_BE_REPLACED 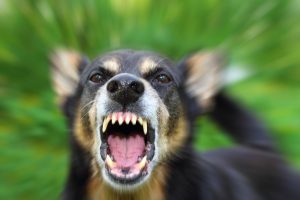 Millions of American households have a family pet. According to the Insurance Information Institute, over 63 million of these pet-owning homes have a dog. Dogs are beloved pets and often become a part of the family. However, there is always a possibility that a dog can bite a person. Dog bite injuries can be very painful and serious, so it is important to understand how to avoid getting a dog bite.

A few tips to avoid a dog bite injury include:

END_OF_DOCUMENT_TOKEN_TO_BE_REPLACED

A Riverside County dog attack on Saturday resulted in dog bite injuries to an Anza woman. According to ABC 7 News, the woman was outside hanging laundry out to dry when three dogs attacked her around 9:30 a.m.

Emergency personnel and animal control were called and responded to the scene. Ultimately, the woman was airlifted to the hospital because of her injuries. The three dogs were taken by animal control—all three are pit bulls or pit bull mixes. It is likely that the dogs will be put down.

The owner of the dogs was contacted and later arrested on other outstanding warrants. Animal Services director stated, “This is another preventable attack on an innocent person and one we find very upsetting…Our hearts go out to [the victim] and her family.”

END_OF_DOCUMENT_TOKEN_TO_BE_REPLACED

We love dogs and all animals.  Many people certainly love their dogs. It is important to remember that any dog can bite, and our dog bite lawyers have seen serious dog bite injuries caused by all types and sizes of dogs.

Under California law, dog owners are strictly liable if their dog bites someone. This means if a dog bites another person, the owner is liable for that person’s injuries even if the owner did nothing wrong and the dog has never bitten anyone before. There are two limits to this liability: first, you can’t provoke the dog, and second, you must either be in a public place or lawfully on private land. For example, if you are trespassing and a dog bites you, you may not be protected.  END_OF_DOCUMENT_TOKEN_TO_BE_REPLACED

Dogs are one of the most popular pets in the United States. People love their dogs, but not all dogs love people.  Any dog can bite and our dog bite lawyers have seen bad dog bite injuries caused by all sizes of dogs. Knowing what to do and not to do in the face of an unknown dog can make a difference in the outcome for you and your family.  Of course every situation is different and you should rely on what you think is the best thing to do if you are being attacked or see someone being attacked.  Below is some general advice:

END_OF_DOCUMENT_TOKEN_TO_BE_REPLACED

We are happy to report that we have obtained a settlement of over $200,000.00 for one of our clients who was the victim of a dog bite in Van Nuys, California. This particular client was walking her dogs when a neighbors dog came out of the house and attacked one of her dogs. Our client did what any responsible dog owner would do and attempted to help her dog.

Unfortunately, in the process, the neighbor’s dog bit our client’s finger and bit off a small piece of our client’s pinky finger. Our client attempted to resolve the matter on her own without hiring an attorney. The owners of the dog refused to even pay for our client’s medical bills and she hired our firm.

Fortunately, the other party had insurance. Their insurance adjuster first tried to argue that our client assumed the risk of injury by trying to help her dog. The adjuster also tried to argue that it was not a bad injury. We successfully argued and proved the severity of the injury, as well as the psychological effects of such an attack, and resolved the case for more than $200,000.00.

END_OF_DOCUMENT_TOKEN_TO_BE_REPLACED

A Riverside dog attack on Friday resulted in dog bite injuries to an eleven year old boy. According to the Los Angeles Times, the Riverside dog bite occurred when a pit bull dog, belonging to a neighbor, somehow escaped from a leash and attacked the boy. The father of the boy then got his gun and shot the dog.

Riverside police said the pit bull dog attack victim should recover fully from his dog bite injury. The dog was taken by animal control and is expected to be put down. It was not reported what part or parts of the body of the boy were bitten by the pit bull dog. Usually, the wounds occur to the hands, arms or legs, as these are the areas that dogs frequently strike.

Some very serious dog attack injuries occur when dogs bite near the head or neck area of a victim. These dog bite wounds may leave unsightly scars and/or cause severe emotional distress in their victims. Many dog attack victims often suffer from nightmares associated with the incident and have trouble getting back to their normal lives, including trusting other dogs.

The California dog bite law is that the owner of a dog is strictly liable for the damages caused when the dog bites another person. This means that the owner is responsible for any dog bite damages, regardless if the dog has attacked anyone in the past. Some people mistakenly think that there is a “one bite rule” in which the owner is not responsible the first time his or her dog attacks and bites a victim. However, it does not matter if there was a prior bite in the dog’s history or what type of dog is involved.

END_OF_DOCUMENT_TOKEN_TO_BE_REPLACED

A 75 year old woman had to have her leg amputated due to injuries she suffered from a pitbull dog attack in San Diego. The woman is still being treated in the hospital due to dog bite injuries to her back, legs and arms.

The owners of the pitbull dogs, Carla Cornelio and Alba Cornelio, have been arrested and face felony charges for owning the dogs that caused the serious injury to the woman. The two pitbull dogs were euthanized by the Department of Animal Services.

According to the Los Angeles Times, the dogs had previously attacked another neighbor’s dog and the neighbor, and the Cornelios apparently paid the veterinary bills for that San Diego dog attack.

END_OF_DOCUMENT_TOKEN_TO_BE_REPLACED

We are extremely proud to announce that a member of our firm, Gary Walch, was selected Personal Injury Attorney of the Year for 2010 by the Editorial Staff of the Consumer Business Review.

During his legal career of successfully handling thousands of serious injury claims in Los Angeles, Orange, Ventura and San Bernardino counties he has resolved claims for many millions of dollars for his clients.

END_OF_DOCUMENT_TOKEN_TO_BE_REPLACED

According to the Los Angeles Times, an unusual dog attack occurred in Monrovia, California on Wednesday, when a 6 month old baby girl was snatched from her mother’s arms by their neighbors’ Great Dane dog. The 180 pound dog grabbed the child and carried her about 200 feet before dropping her in the street.

While the toddler survived, according to the Monrovia Police Department, she did suffer “broken ribs, a collapsed lung, a perforated liver, broken clavicle and multiple puncture wounds to her back.” Fortunately, the child is doing better now and is expected to be weaned off of the ventilator. While this particular type of dog attack is rare, Los Angeles dog bite and dog attack injuries occur frequently.

Many dog owners do not carefully watch over their dogs and expose the general public to an unnecessary risk. Usually, for the Los Angeles dog attack or dog bite victims, their recourse is against the homeowners’ insurance for the dog owner.